Bhaktivedanta Hospital & Research Institute is a multi-speciality tertiary care hospital located in Mira Road. We are committed to serving the society at large by delivering compassionate, holistic and affordable medical services.

The Hospital is committed to establishing necessary facilities of international standards, conducting research programs in various fields of health/patient care and ensuring that the research findings are translated into improvements in patient care. Our management and team work in cohesion to provide best treatment to our patients and to promote preventive medical care in the society at large.

Bhaktivedanta Hospital & Research institute offers holistic healthcare for the body, mind and soul with advantages of Allopathic, Ayurvedic, Homeopathic and other alternative medical therapies under one roof. Our hospital promotes preventive medical care in the society at large. 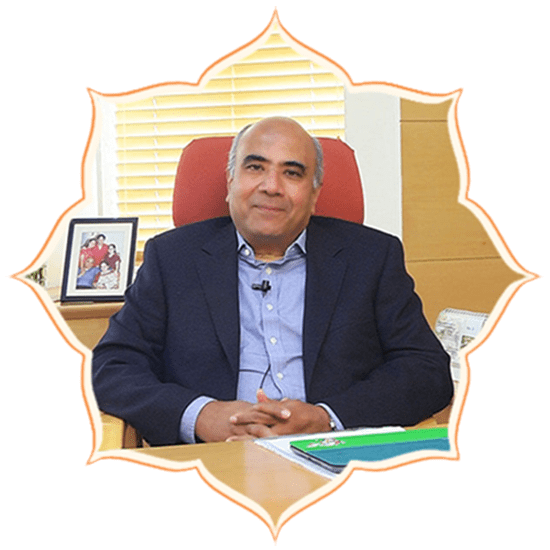 I am privileged to be a part of Bhaktivedanta Hospital & Research Institute for the past two decades. Our hospital is a special place where people are dedicated to serve patients in pain and agony with care, love and devotion. This is one unique hospital, where doctors and staff treat patients, residents and family caregivers with compassionate care and support.

Our hospital gives patients and community members the opportunity to provide care, where innovation, education and research make a difference in patient care. Our staff and physicians are encouraged to render all possible services to make the patients and relatives comfortable.

The Spiritual Care department of our hospital understands the importance of spiritual and emotional well-being and its role in the overall healing process of patients. The department ensures that not only patients, but everyone related to patients are positive and able to deal with the crisis spiritually and emotionally.

Taking our legacy forward of providing patients care with devotion, I am very delighted to share that we are adding 100 more beds and the state-of-the-art Radiotherapy facility in our Annexe Hospital Building.

I take immense pride in sharing that time and again Bhaktivedanta Hospital & Research Institute has proved themselves for displaying exceptional commitment to development through consistent innovation, impact, monitoring & evaluation and displaying high levels of ethics and transparency by social entrepreneurial ventures.

I am thankful to each and every one of you - staff & doctors at the base hospital and other satellite centers for their continued and steadfast support, active participation and prompt service delivery. We look forward to being a part of your journey as we continue to serve those who come to us in need. I am certain that with your support our hospital shall continue to provide quality care and treatment to everyone, at affordable rates.

I sincerely pray that the Lord gives us the strength & wisdom to continue to serve humanity & live the mission of treatment for the Body, Mind & Soul. 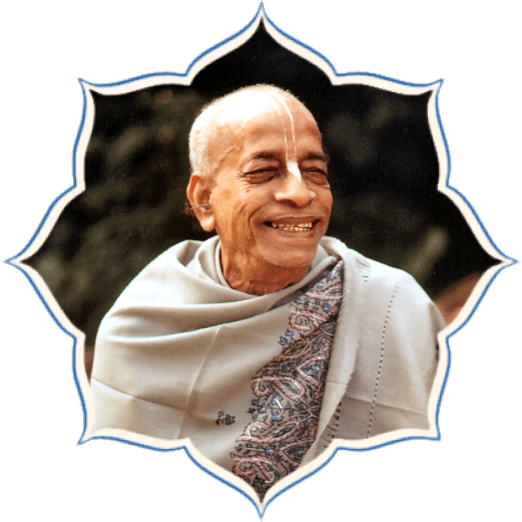 For millennia the teachings and the rich culture of bhakti-yoga, or Krishna Consciousness, had been hidden within the borders of India. Today, millions around the globe express their gratitude to Srila Prabhupada for revealing the timeless wisdom of bhakti to the world.

Srila Bhaktisiddhanta was a leader in the Gaudiya Vaishnava community, a monotheistic tradition within the broader Hindu culture. At their very first meeting, Srila Bhaktisiddhanta asked Abhay to bring the teachings of Lord Krishna to the English-speaking world. Deeply moved by his devotion and wisdom, Abhay became a disciple of Srila Bhaktisiddhanta in 1933, and resolved to carry out his mentor’s request. Abhay, later known by the honorific A.C. Bhaktivedanta Swami Prabhupada, spent the next 32 years preparing for his journey west.

Srila Prabhupada’s most significant contributions, perhaps, are his books. He authored over 70 volumes on the Krishna tradition, which are highly respected by scholars for their authority, depth, fidelity to the tradition, and clarity. Several of his works are used as textbooks in numerous college courses. His writings have been translated into 76 languages. His most prominent works include: Bhagavad-gita As It Is, the 30-volume Srimad-Bhagavatam, and the 17-volume Sri Caitanya-caritamrita.

Born as Abhay Charan De on September 1, 1896, in Calcutta, as a young man he joined Mahatma Gandhi’s civil disobedience movement. In 1922, a meeting with the prominent scholar and spiritual leader, Srila Bhaktisiddhanta Sarasvati, proved to be most influential on young Abhay’s future calling. 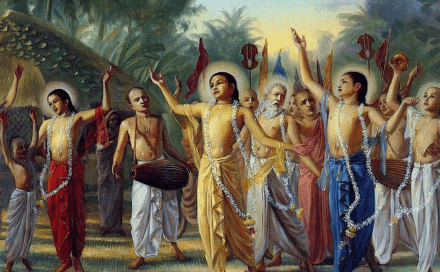 In July of 1966, Bhaktivedanta Swami established the International Society for Krishna Consciousness (ISKCON) for the purpose he stated of “checking the imbalance of values in the world and working for real unity and peace”.

In the eleven years that followed, Srila Prabhupada circled the globe 14 times on lecture tours spreading the teachings of Lord Krishna. Men and women from all backgrounds and walks of life came forward to accept his message. With their help, Srila Prabhupada established temples, farm communities, a publishing house, and educational institutions around the world. And, he began what has now become the world’s largest vegetarian food relief program, Hare Krishna Food for Life.

In 1965, at the age of sixty-nine, Srila Prabhupada Begged for a free passage and boarded a cargo ship, the Jaladhuta, to New York. The journey proved to be treacherous and he suffered two heart attacks aboard. After 35 days at sea, he first arrived at a lonely Brooklyn pier with just seven dollars in Indian rupees and a crate of his translations of sacred Sanskrit texts. 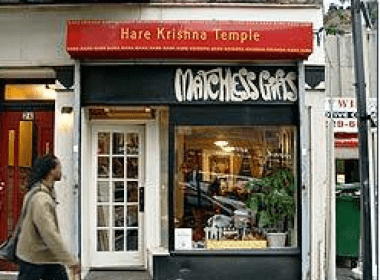 In New York, he faced great hardships and began his mission humbly by giving classes on the Bhagavad-gita in lofts on the Bowery and leading kirtan (traditional devotional chants) in Tompkins Square Park. His message of peace and goodwill resonated with many young people, some of whom came forward to become serious students of the Krishna-bhakti tradition. With the help of these students, Bhaktivedanta Swami rented a small storefront on New York’s Lower East Side to use as a temple.

A.C. Bhaktivedanta Swami Srila Prabhupada passed away on November 14, 1977, in the holy town of Vrindavana, surrounded by his loving disciples who carry on his mission today.

With the desire to nourish the roots of Krishna consciousness in its home, Srila Prabhupada returned to India several times, where he sparked a revival in the Vaishnava tradition. In India, he opened dozens of temples, including large centers in the holy towns of Vrindavana and Mayapura.

Radhanath Swami was born in Chicago, USA. In his teenage years, he embarked on a journey of discovery of the world and religion that ultimately led him to India where he met Srila Prabhupada in 1971 and embraced his teachings. Initially serving in India, Radhanath Swami returned to the USA where he served at a West Virginia farming community and was initiated by Srila Prabhupada (1973). 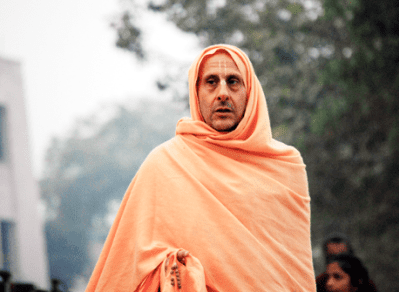 Radhanath Swami took the vows of sannyasa in 1986 and returned to India. His major efforts in India have resulted in the large community and Temple in Chowpatty, Mumbai, and ISKCON Belgaum temple. Other programs of sharing Krishna consciousness are currently faring successfully in Kolhapur, Nasik, Aurangabad, Nigdi and other centers in the Maharastra state of India. 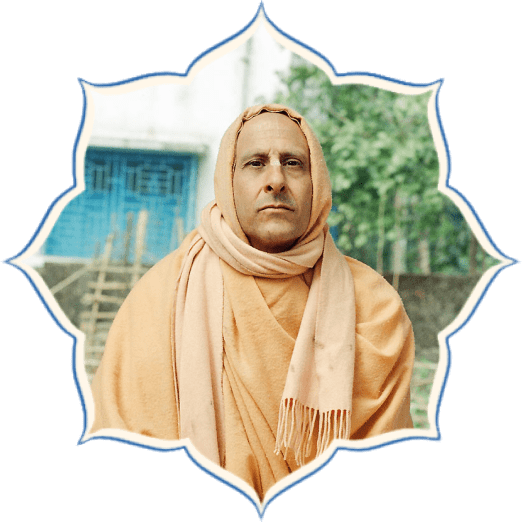 Radhanath Swami became a member of the GBC (Governing Body Commission of ISKCON) in 1996, and is responsible for the following zones: Villa Vrindavana, Firenze area, Centro Studio Bhaktivedanta, Bologna area, and Venice area Italy; and in India; Chowpatty, Mumbai, and Maharastra. In his role as co-zonal secretary he supports Goa, Daman, Diu, Maharashtra, and Calcutta in West Bengal.

Radhanath Swami has a special interest in the holy places in India and leads thousands of devotees on pilgrimage each year. Radhanath Swami is a trustee of Bhaktivedanta College, Belgium, by providing his spiritual support and encouragement. 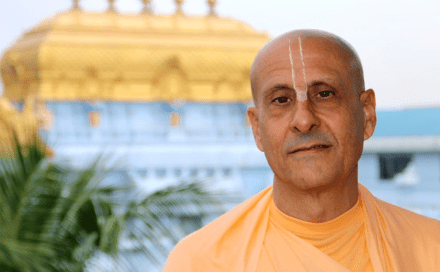 For the past twenty-five years, besides guiding the development of the ISKCON Chowpatty community in Mumbai, Radhanath Swami has directed a number of acclaimed social action projects including Midday Meals, daily serving over 250,000 plates of pure vegetarian food to the children in the slums of Mumbai. He has also worked to establish missionary hospitals and eye camps, eco-friendly farms, schools and ashrams, an orphanage, and a number of emergency relief programs throughout India. 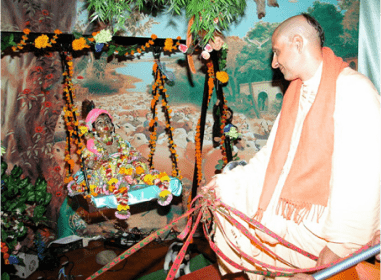 Radhanath Swami is the author of The Journey Home: Autobiography of an American Swami, and the title has been received well by the mainstream audience as well as ISKCON members. The Huffington Post and ISKCON News regularly post articles by Radhanath Swami.

It gives us immense pleasure to share our new
hospital logo

It gives us immense pleasure to share our new hospital logo

Following is the description of the various aspects of our logo:

Following is the description of the various aspects of our logo: 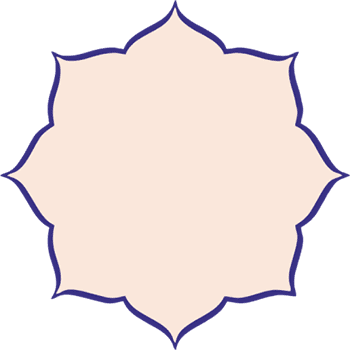 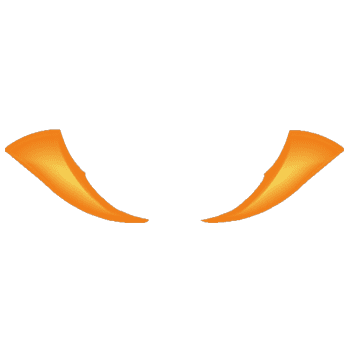 The bottom arc support base (dark saffron) represents the varnashram system which forms the basis of our activities, through which overall balance is maintained at all levels. 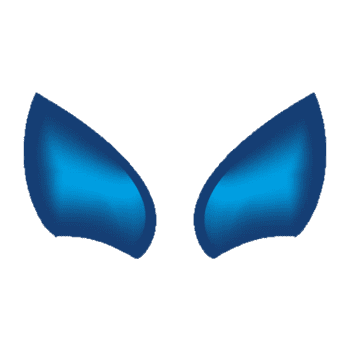 The 2 blue petals represents our focus for betterment of the body and mind. 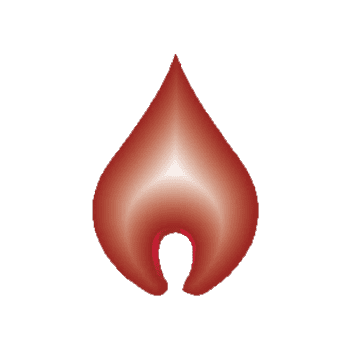 The top petal (dark micadocolor):- represents the soul aspect i.e. spiritual well being, on which we lay much importance along with the body and mind. 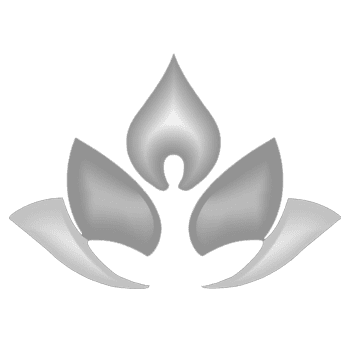 The human image impression (in white), with arms raised, represents the over all well being and happiness of human society, which we try to achieve through our collective efforts, in the mood of ‘Serving in Devotion’.